Thank you for choosing GameDriver! We believe in better video games through the power of test automation, and want to help you get the most out of your testing efforts. This guide will help you through the installation and initial configuration process. Any errors or omissions can be reported to support@gamedriver.io.

The GDIO Unity Agent is installed by importing the GameDriver .unitypackage for your specific release, and is then as a GameObject in your Unity project, through the IDE.

Be sure to register for a trial license and Download the appropriate .unitypackage  from GameDriver.io/license. For example:

From back in the Unity editor, navigate to Assets > Import Package and select Custom Package: 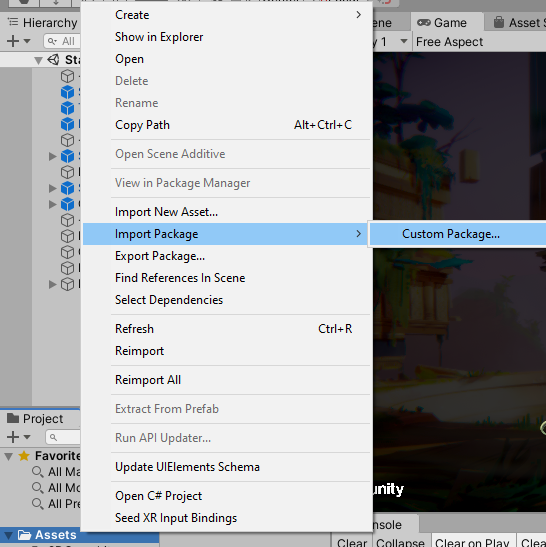 Select the .unitypackage appropriate for your Unity version and click Open: 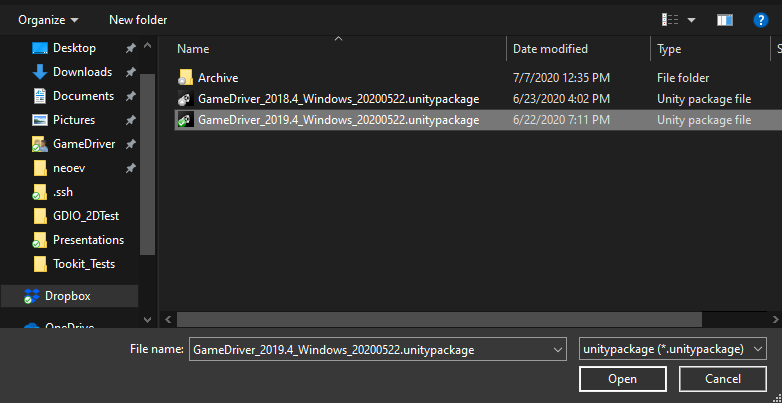 Ensure all of the objects and folders in the import package are selected and select Import: 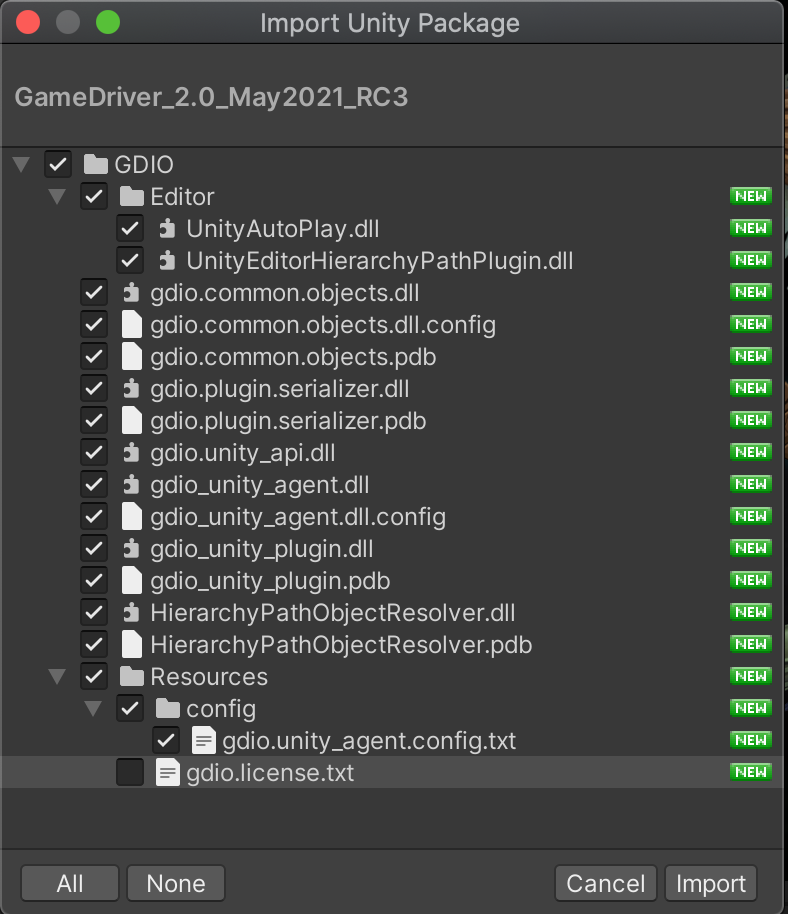 In order to run a test, a license file needs to be present. If you didn't download the license in step 1, do it now. The license file will need to be renamed to "gdio.license.txt", and copied to the Assets\GDIO\Resources folder in your game project in order for the agent to run.

Add an empty GameObject in the base of your game hierarchy. If you have multiple scenes, it will be necessary to attach the agent to a scene that is loaded initially but is not likely to be reloaded later, such as a splash screen or menu. This is due to the agent remaining resident in memory after the scene has been closed. 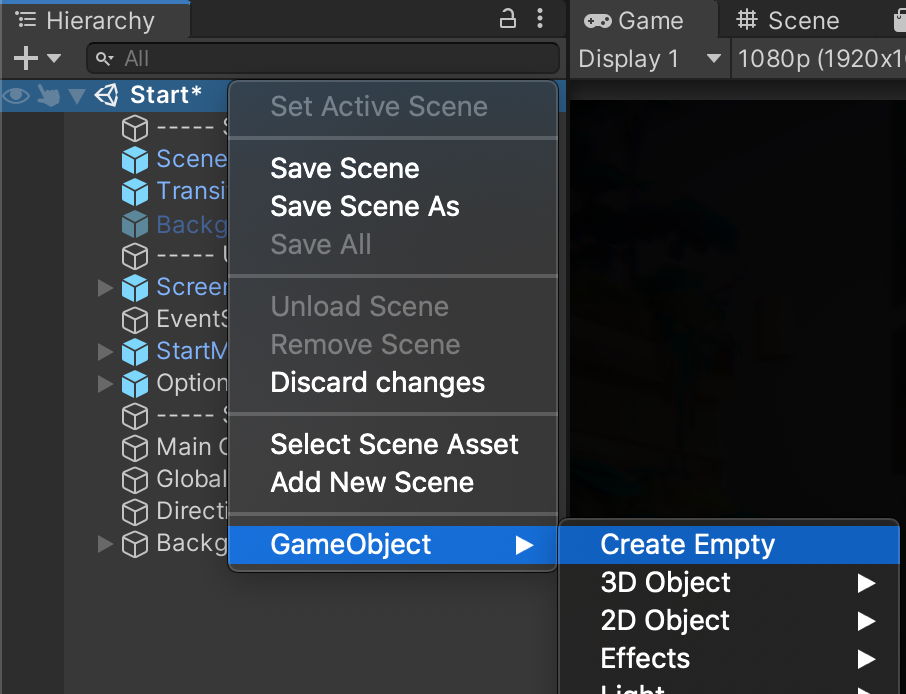 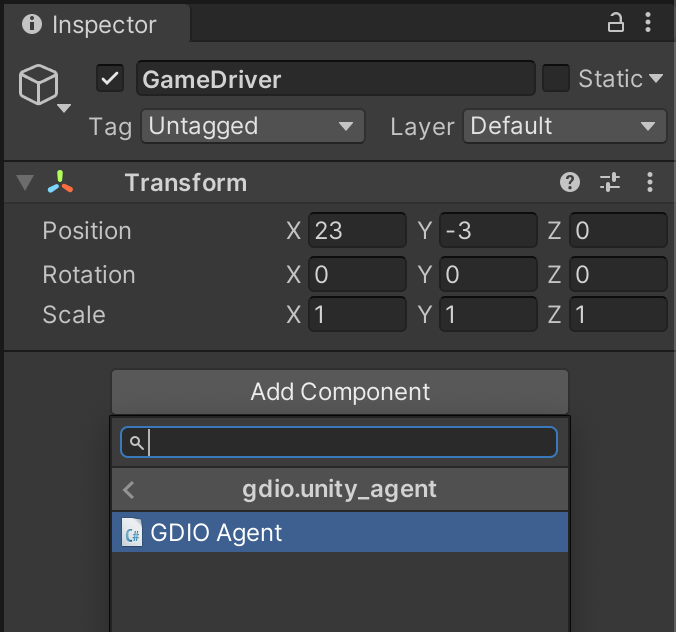 Once the agent is installed, it can be configured via the GameObject in the inspector. A brief description of each option can be found below. 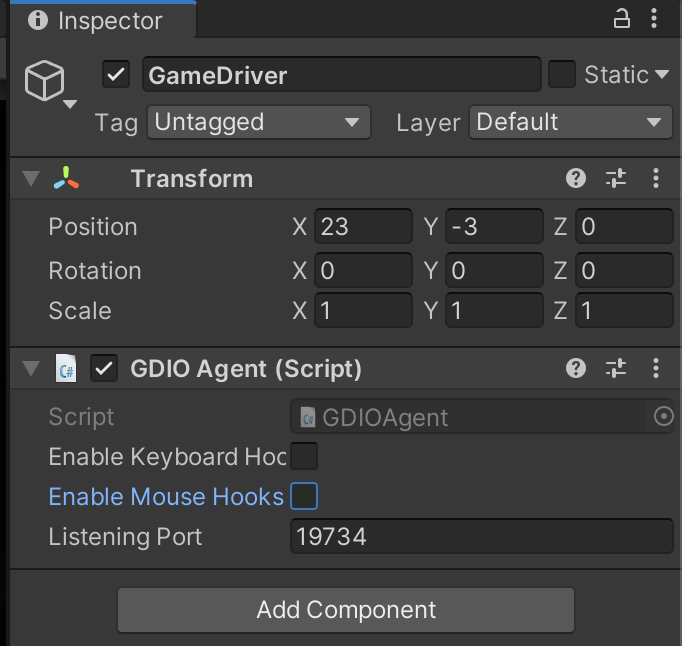 The GameDriver agent requires your Unity game to be compiled using the .NET 4.x scripting runtime. WARNING: There may be compatibility issues with games built using .NET Standard 2.0 API compatibility. 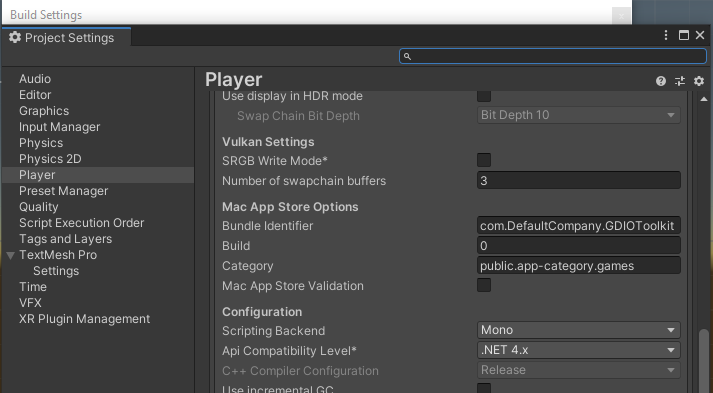 For a working version of the test project below, visit our GitHub repo. The rest of this guide will explain how the example project was set up and can be used as a reference. The instructions below and the example provided assume a standalone test class project will be used. To integrate your GameDriver tests with your Unity project and utilize the Unity Test Framework, please refer to these instructions.

The GameDriver API can be used with a test framework such as NUnit, which provides essential capabilities such as test execution, base reporting, and assertions (checks). It is also cross-platform compatible, which is ideal for our purposes. To demonstrate, we will use Visual Studio 2019 Community edition for Windows, and Visual Studio for Mac Community edition, along with NUnit. Other development environments and test frameworks will vary. 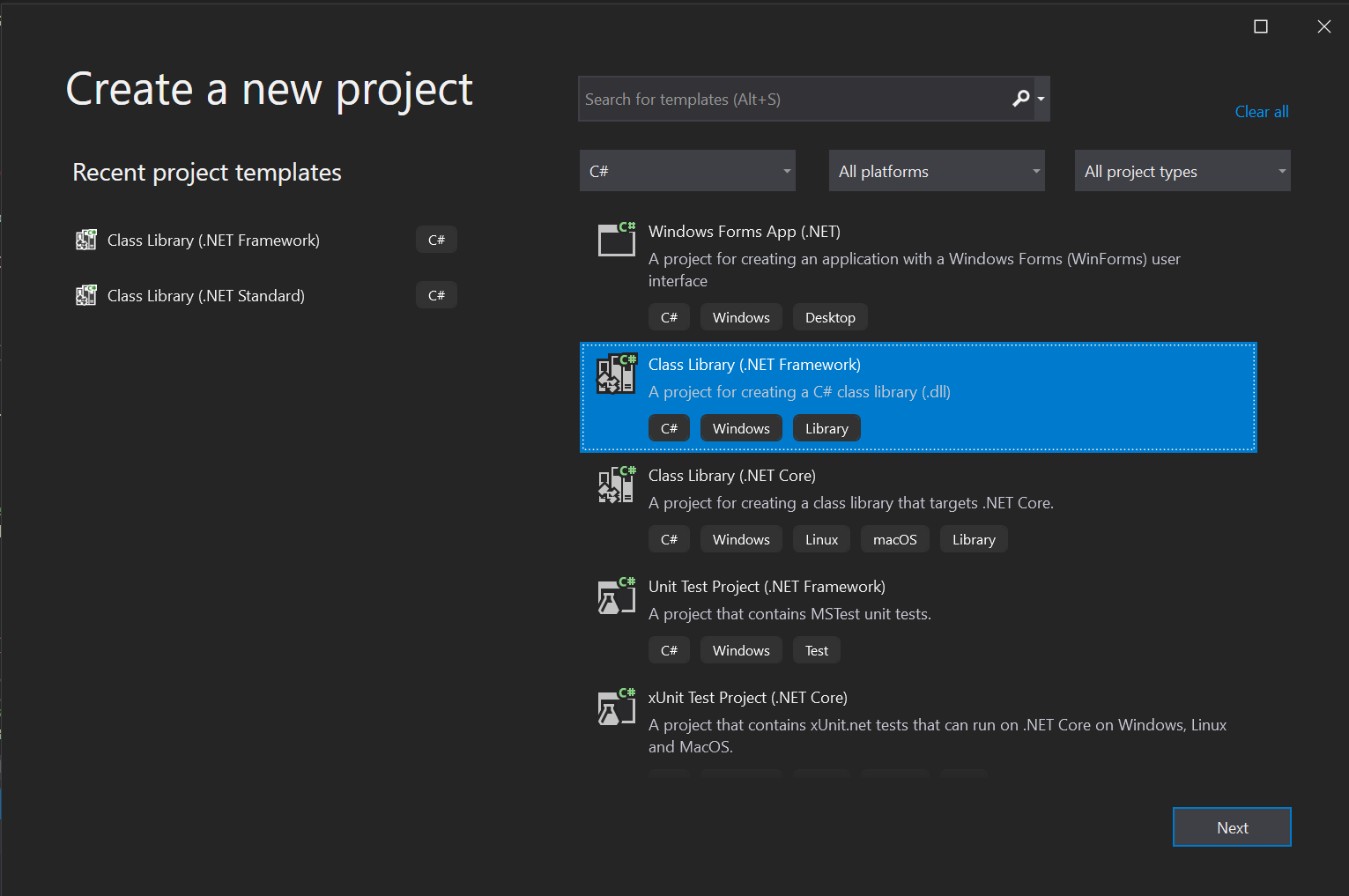 Note: If you do not see this option when starting a new project, you may need to modify your Visual Studio installation to include the Desktop Development workload shown below.

In macOS, use the Other > .NET > Library template from the Visual Studio project creation screen: 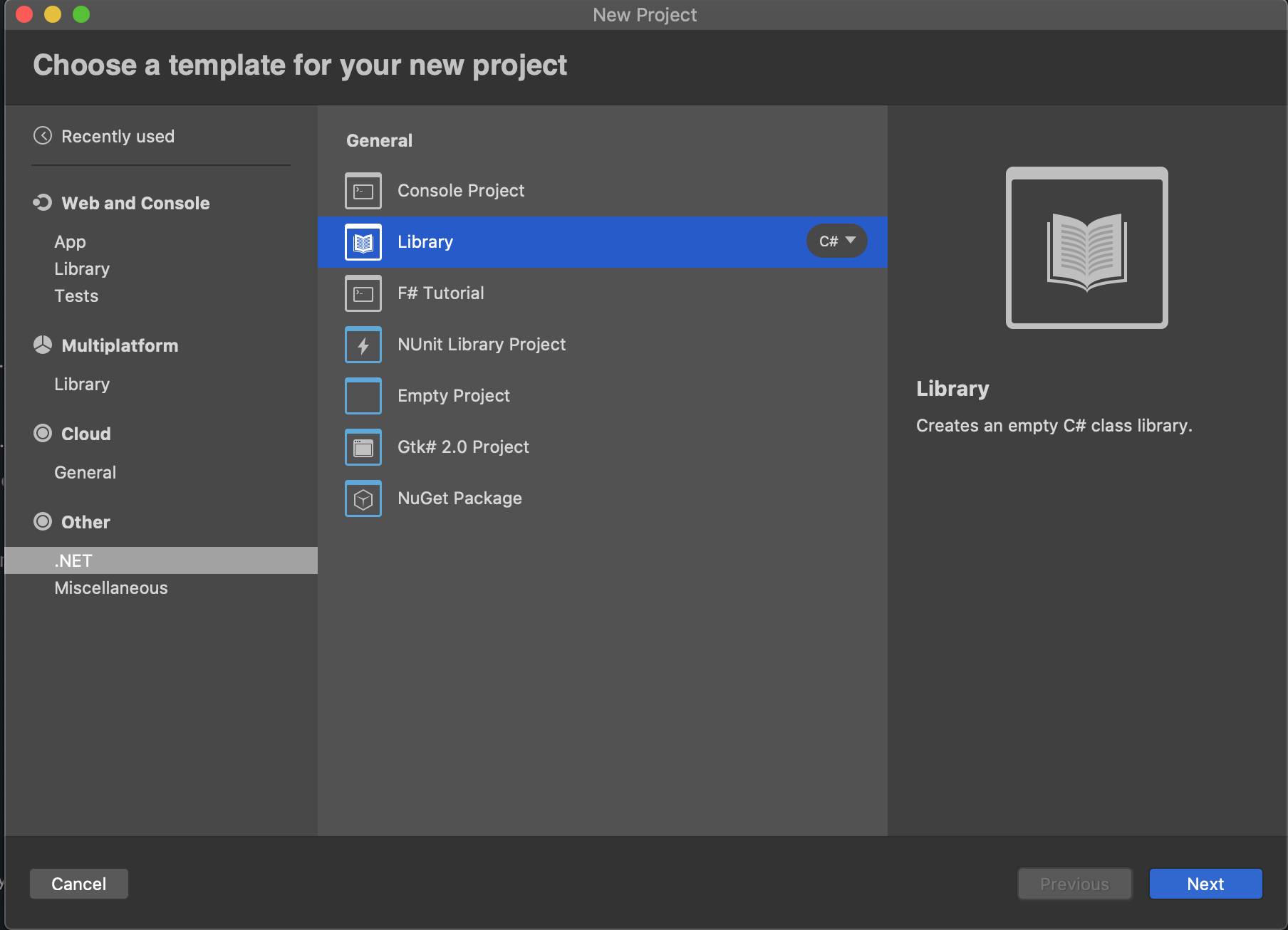 In the project references, you will also need to add the following DLLs to resolve all of the above classes. Those are gdio.common.objects, gdio.plugin.serializer, and gdio.unity_api. In Visual Studio, simply right-click the "References" node in the Solution view, shown below, then navigate to the libraries. The libraries will be located in the \Assets\GDIO folder where you imported the .unitypackage at the start of this document. 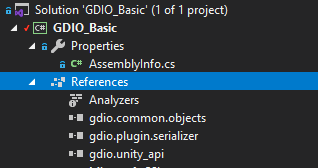 Note: Be sure to verify your test project is using the .NET Framework 4.7.x library. In Visual Studio, this can be found under the Solution > Project (right-click) > Options (as shown in VS for Mac below): 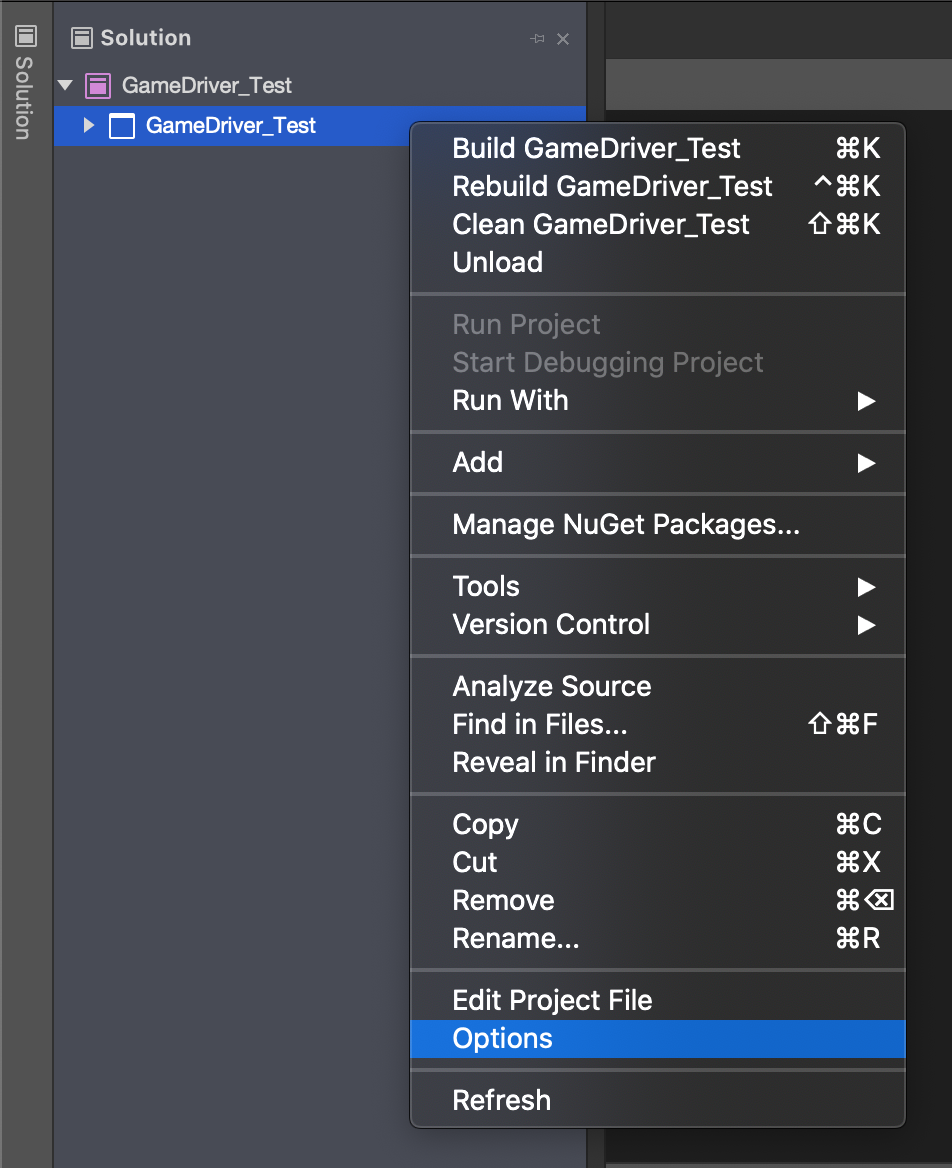 Then under the General tab in the Project Options, under Target Framework. 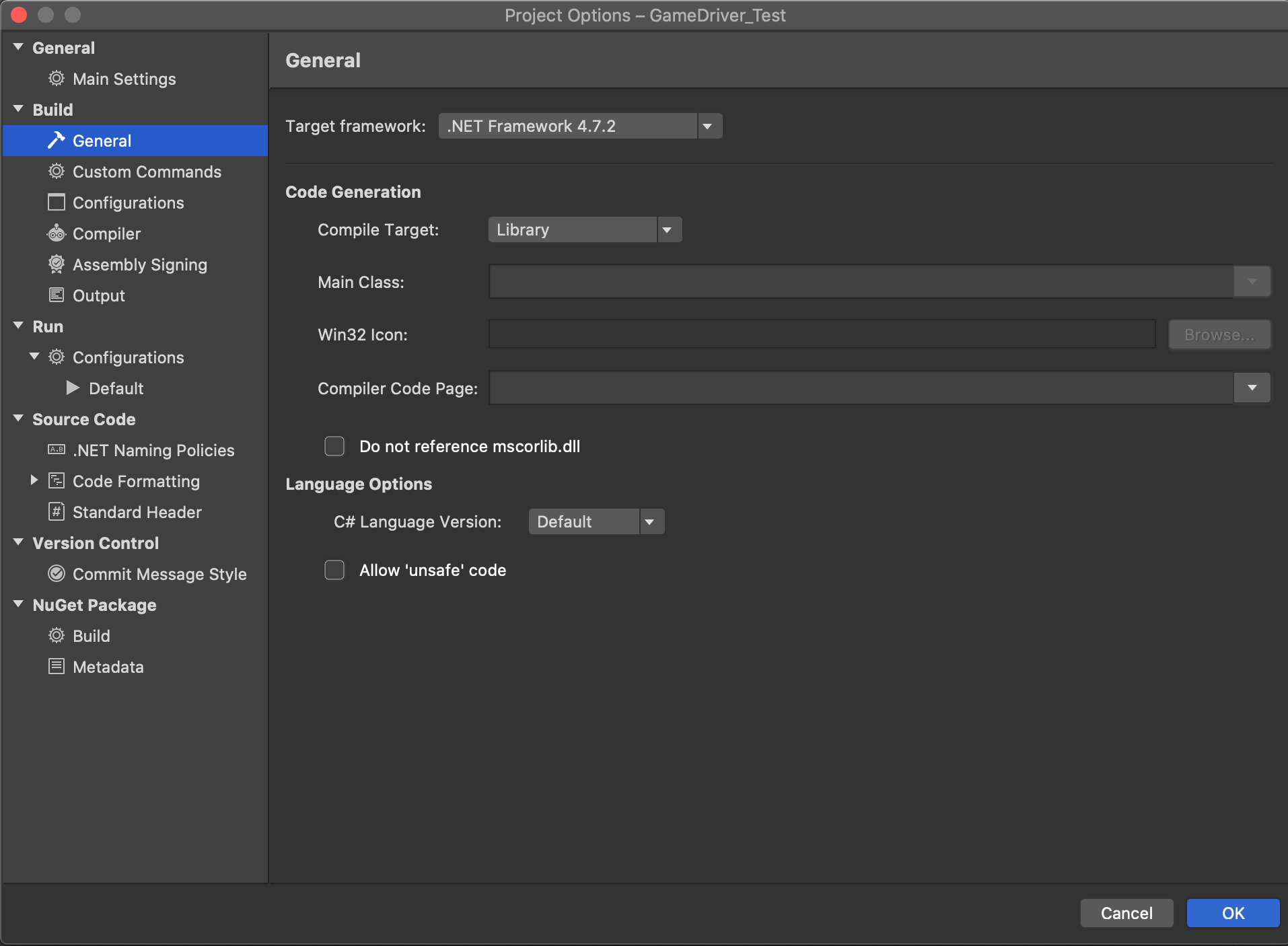 The location of this option in other IDEs may vary, along with other IDE-specific settings such as the Test Runner (View menu > Tests in Visual Studio for Mac), which is used to execute your tests in the IDE. 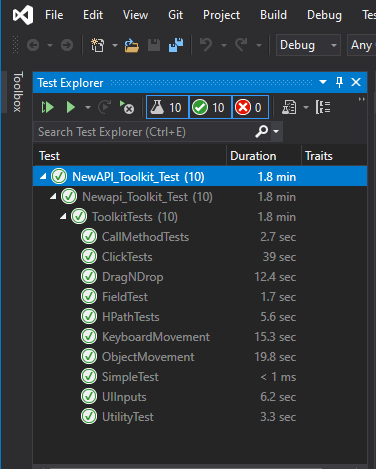 You are now ready to start automating your testing! Be sure to follow the Getting Started with GameDriver guide and the 2D Game Kit Tutorial for additional tips on how to get started, as well as the more advanced "Testing the 2D Game Kit: the "correct" way" and other articles on this site.

Attaching to your Game

Once you have configured your game and test environment, it is necessary to connect to the GameDriver agent via API in order to run a test. There are a few ways to connect to your game and initiate testing; either attaching to the Unity editor in Play Mode or executing the game build executable.

On macOS, the path would look something like this:

Note: The @ Symbol in this method is used to escape the entire string. Without this, it is necessary to escape all special characters in the path.

For information on building your game for use with GameDriver see “Configure the Unity Build” above.

The NUnit test framework provides basic tools for assertions (or checks) and execution of tests inside Visual Studio and other common IDEs, as well as from build systems such as Jenkins. NUnit follows a structure that the IDE interprets for configuration at run-time, which also allows the test to exclude some of the standard components of C# coding, such as the Main method. Generally, the template supplied by the IDE can be followed for test creation. More information on the structure and usage of NUnit tests can be found here.

For the purpose of GameDriver testing, tests should be structured as follows. The comment sections are provided as information only and can be removed.

No known limitations at the time of this publishing